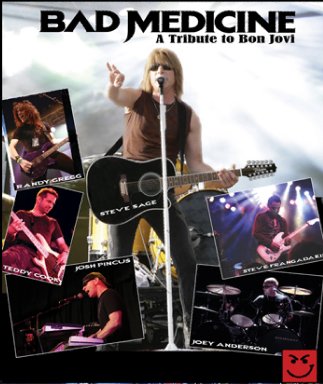 Hailing from Long Island, NY, BAD MEDICINE has spent the last seven years establishing themselves as one of the most sought after tribute shows in the nation.

The bands boasts five top tier musicians whose shared musical histories include Thin Lizzy, Dio, Great White and Brett Michaels. Incredible musicianship and vocal talents blend together with Steve Sage’s uncanny resemblance to Bon Jovi. That combination is why BAD MEDICINE is hailed as the Number One BON JOVI TRIBUTE in the USA.

Performing around the country in some of the nation’s most revered venues (HOB, BB Kings, Harrah’s, Westbury Music fair) and events, this exciting band continues to hold audiences captive.