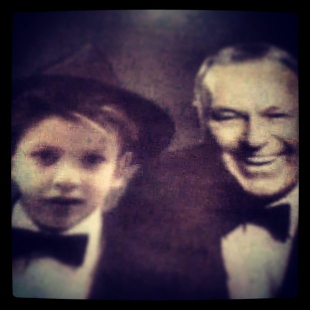 DAKOTA’S first professional gig was at Mickey Rourke’s club in Miami at the age of five. SINATRA heard a recording DAKOTA did. At one of SINATRA’S concerts, he asked Tom Dreesen to go out into the audience to bring DAKOTA back stage to meet him. The meeting made The National Enquirer the next day.

SINATRA gave DAKOTA the orange, silk handkerchief from his vest pocket & handed it to DAKOTA with his blessing, saying “You’ve Got it Kid.” Carry on the legend.

DAKOTA went on to tribute SINATRA in “Legends in Concert” in Vegas.

DAKOTA HAS CONTINUED TO TRIBUTE FRANK SINATRA TO THIS DAY

​You can also add Dean Martin Tribute to the fun! Tony Felicetta and Dakota Horvath Perform​​ as Dean Martin and Frank Sinatra